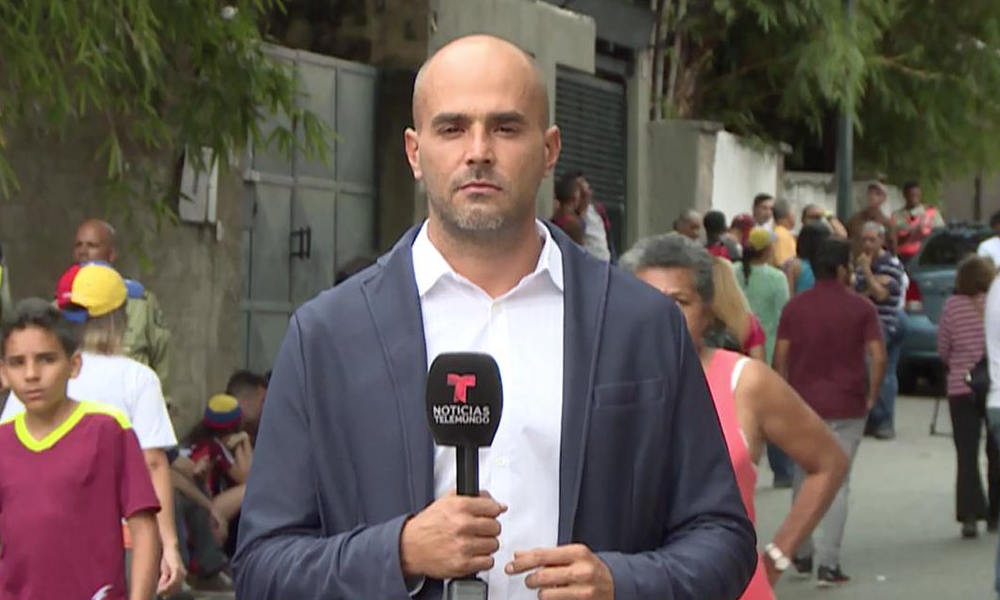 Telemundo journalist Daniel Garrido was abducted near his hotel in Venezuela and interrogated for more than six hours, the channel said on Tuesday, less than a day after another journalist was detained while interviewing President Nicolás Maduro.

The incident began at about 6 a.m. local time on Tuesday when Garrido was abducted near Hotel Cayena in the capital Caracas, according to a statement from Noticias Telemundo. Garrido was covering the detention and deportation of Univision journalist Jorge Ramos and his team.

“A group of armed and unidentified individuals forced him into a vehicle and covered his head with a hood,” the channel said. “After questioning him for six hours and taking his work equipment, the kidnappers freed him without explanation and without returning his equipment.”

The channel did not specify who was responsible for Garrido’s abduction, but the National Union of Press Workers in Venezuela (SNTP) said Garrido was taken by agents from the intelligence service Sebin.

Tuesday’s incident came less than 12 hours after Ramos and his team were detained while interviewing Maduro, who is facing growing pressure from the international community to step down. Their recordings were taken and they were released after 2.5 hours before being deported.

Ramos said he asked Maduro about the humanitarian crisis and showed video of teenagers eating from a garbage truck, which prompted Maduro to walk out. Another official then said the interview wasn’t authorized and took their equipment.

Venezuela’s information minister Jorge Rodriguez dismissed what happened on Monday as a ‘show’ by the U.S. State Department, arguing that the presidential palace has received hundreds of journalists. “We won’t be part of this cheap show,” he said.

Maduro is facing pressure to step down after opposition leader Juan Guaidó declared himself president, which has been recognized by dozens of countries, including the United States. More than 160 service members have deserted to Colombia in support of Guaido.