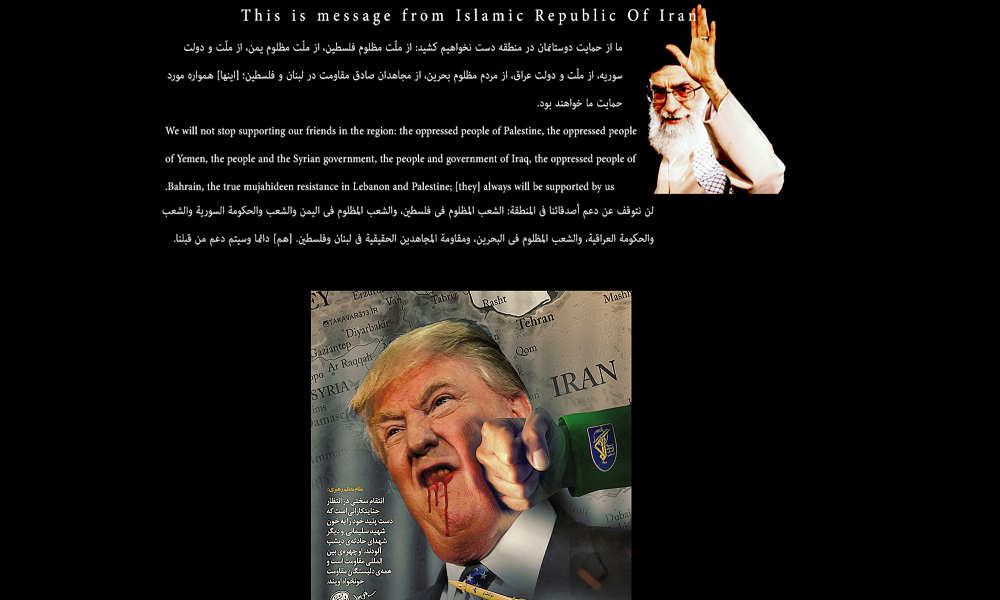 A U.S. government website which is operated by the Federal Depository Library Program was hacked and defaced by Iranian hackers on Saturday night, just hours after American officials warned about possible cyber attacks in response to the U.S. killing of Quds Force commander Qasem Soleimani.

Those trying to access the FDLP website on Saturday night were shown a black page with a message from hackers who call themselves the “Iran Cyber Security Group.” It warned that the hack was only a “small part” of Iran’s cyber ability and showed an image of U.S. President Donald Trump being hit with a fist.

It was not immediately known who was behind the cyber breach or whether government data had been compromised.

“We are aware the website of the Federal Depository Library Program was defaced with pro-Iranian, anti-US messaging,” the U.S. Cybersecurity and Infrastructure Security Agency said in a statement. “At this time, there is no confirmation that this was the action of Iranian state-sponsored actors. The website was taken off line and is no longer accessible. CISA is monitoring the situation with FDLP and our federal partners.”

“An intrusion was detected on GPO’s FDLP website, which has been taken down. GPO’s other sites are fully operational. We are coordinating with the appropriate authorities to investigate further,” said Gary Somerset, a spokesman for the U.S. Government Publishing Office (GPO). There was no word on whether any government data had been compromised.

The hack came just hours after Trump threatened to launch a military strike against dozens of Iranian targets if Americans are hit in retaliation for Soleimani’s death. He was responding to comments made by Iranian officials, who have vowed to take “harsh revenge” against the U.S., calling Friday’s airstrike near Baghdad Airport an “act of war.”

Also on Saturday, the U.S. Department of Homeland Security said it was “actively monitoring and preparing” for any threats, should one arise, in connection with Soleimani’s death. “The Department is operating with an enhanced posture and various operational components are taking protective measures where prudent and necessary,” Acting Secretary of Homeland Security Chad Wolf said.

A bulletin from the National Terrorism Advisory System said Iran maintains a robust cyber program and is able to execute cyber attacks against the U.S. “Iran is capable, at a minimum, of carrying out attacks with temporary disruptive effects against critical infrastructure in the United States,” the bulletin said.

The current crisis began on December 27 when rockets were fired at a military base in northern Iraq, killing 1 U.S. contractor and injuring several others. The U.S. blamed Kata’ib Hezbollah, an Iranian-backed Iraqi militia which is part of PMF, and carried out a series of airstrikes that killed 25 militiamen.

This in turn led to an attack by Kata’ib Hezbollah militiamen and their supporters against the U.S. Embassy in Baghdad on New Year’s Eve. The U.S. blamed Iran and carried out an airstrike near Baghdad Airport on Friday morning, killing Soleimani and PMF deputy chief Abu Mahdi al-Muhandis. Iran has condemned Soleimani’s killing as an “act of war.”