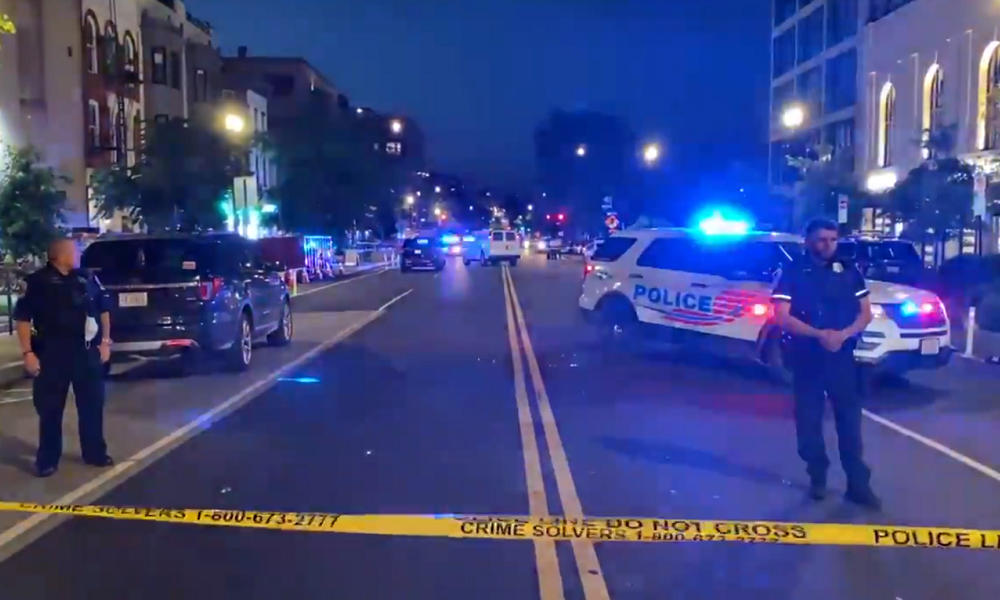 Police near the scene of the shooting (Credit: Anna-Lysa Gayle)
Advertisment

Two people were shot when gunfire erupted in a busy area known for popular restaurants in Washington, D.C., causing panic which injured several other people as they ran for safety, witnesses say. A car was seen fleeing the scene and no arrests were immediately made.

The incident happened at 8:15 p.m. on Thursday when witnesses reported hearing 20 to 30 shots outside Mexicue, a Mexican restaurant on 14th Street NW. Many people at Mexicue and nearby establishments were seen running for safety.

Reporter Igor Bobic, who happened to be in the area at the time of the shooting, said a witness told him that the gunfire was coming from a black sedan which fled the scene.

“I was pulling up to the intersection as this happened and watched one gunman shoot at someone multiple times, in the middle of very busy 14th Street,” Kaitlan Collins, who works for CNN, said on Twitter.

D.C. Councilmember Brooke Pinto said other people injured themselves while running for safety.

“I’ve spoken to neighbors who injured their hands and their toes trying to run away from the gunshots that they heard throughout the street and it was just pandemonium for a while,” Pinto said.

A motive for Thursday’s shooting was not immediately known, but police said they were looking for a black male who was wearing a lime green/yellow hooded sweater. He fled in an older black Honda Civic with DC tags.

This is the scene at 14th and Riggs. Appears to be somebody being treated by first responders pic.twitter.com/lvIw0oBoyO

Related Topics:shootingWashington (D.C.)
Up Next

U.S. Capitol rioter arrested after Bumble match reports him to the FBI