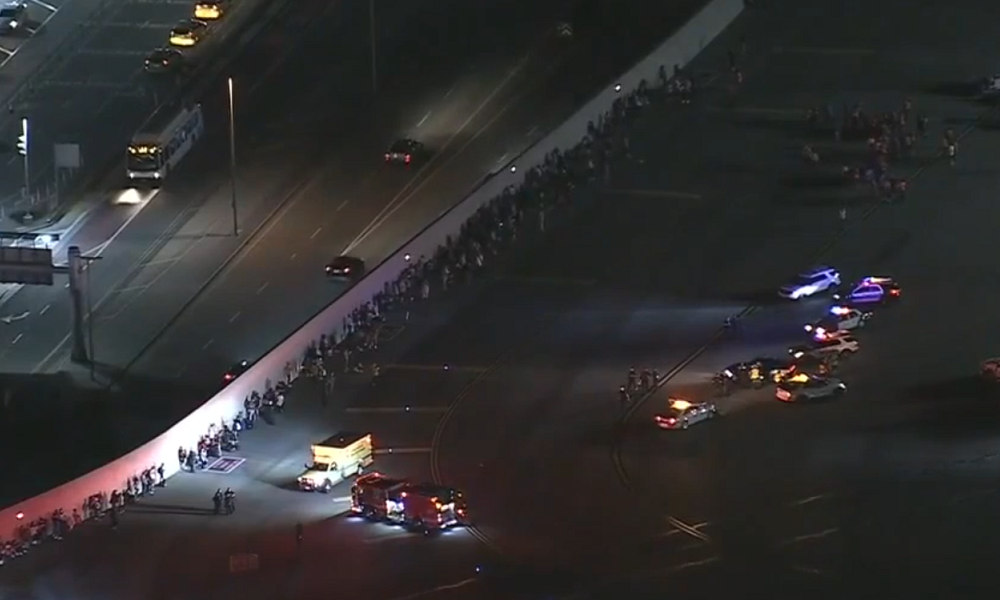 A gun scare caused panic and forced hundreds of people to flee onto the tarmac at Los Angeles International Airport, injuring at least two people, local officials and witnesses say. No weapons were found but two people were taken into custody.

The incident happened at about 7:30 p.m. on Thursday when a person with a firearm was reported in Terminal 1 at LAX Airport. A few minutes later, at 7:39 p.m., all flights were halted as police officers responded to the scene.

“Approximately 300 passengers self-evacuated from the terminal onto the airfield,” a spokesperson for the airport said in a statement. “Airport police responded and detained [two people] for further investigation. There were no shots fired and no weapons recovered.”

One person suffered “moderate” injuries during the panic and was taken to an area hospital for treatment, the spokesperson said. A second person suffered minor injuries.

Other details about Thursday’s incident were not immediately available. Footage taken at the airport showed passengers walking in the vicinity of a plane and dozens more were seen standing near a wall on the airport’s property.

The FAA reopened the south side of the airfield within one hour of the incident and normal operations resumed just after 9 p.m., but flights were still affected by residual delays. Los Angeles International Airport is one of the busiest airports in the world.

Hundreds of passengers at Los Angeles International Airport (LAX) were forced onto the tarmac and out of terminals after an active shooter scare. The FAA has grounded all flights while police investigate. A suspect is in custody, according to @flyLAXairport. 📸: @FOXLA pic.twitter.com/4GQuQDmaw3