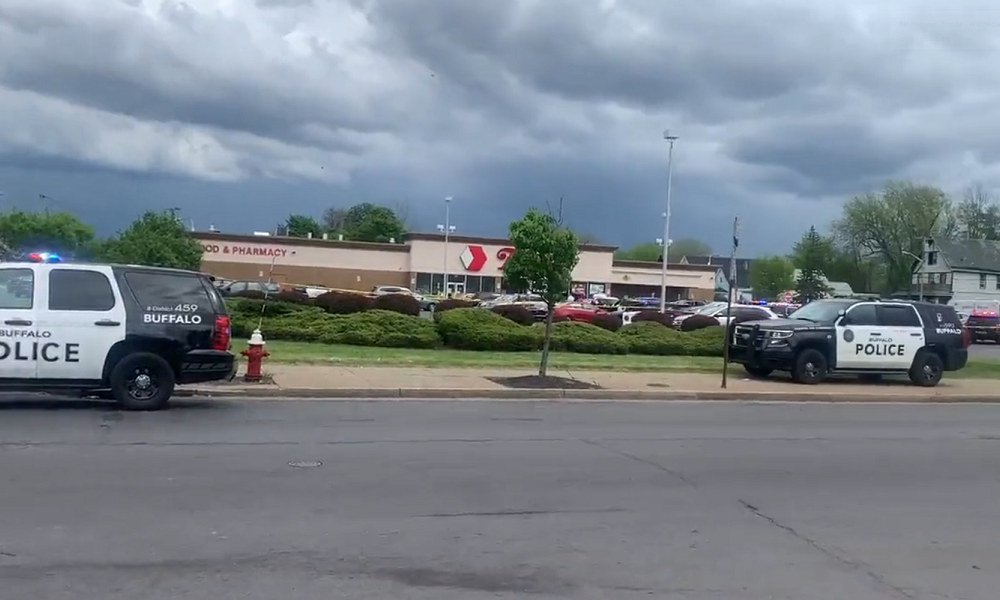 A man has opened fire at a supermarket in Buffalo, New York while live-streaming on Twitch, killing at least 10 people and injuring several others, local officials and witnesses say. He also posted an online manifesto in which he described himself as a white supremacist.

The incident happened at about 2:30 p.m. on Saturday when police were called for an active shooter with a semi-automatic rifle at Tops Markets on Jefferson Avenue in Buffalo. Upon arrival, officers found victims both inside and outside the supermarket.

Buffalo Police Commissioner Joseph Gramaglia said the gunman had opened fire outside the store – shooting four people, including three people who died – before walking into the building. He said the shooter was heavily armed, wearing military fatigues, and prepared for a shootout with police.

Gramaglia said the security guard at the store was a retired police officer who shot the suspect, but the bullet had no effect because he was wearing armored plating. “The suspect engaged our retired officer and he was ultimately shot and deceased at the scene,” the commissioner said.

The gunman then continued his way through the store, killing multiple people, until he reached the entrance again and was met by police. “At that point the suspect put the gun to his own neck,” Gramaglia said, adding that police convinced him to drop the gun before taking him into custody.

A total of 13 people were shot in the attack, including 10 people who died. Three other victims were taken to area hospitals, where two of them were reported to be in critical condition. The other victim suffered non-life threatening injuries.

Saturday’s attack was live-streamed on Twitch and screenshots from the recording showed horrific scenes, including a woman who is shot in the head as she walks in front of the store. In other screenshots, victims can be seen on the floor of the supermarket.

“It’s like walking onto a horror movie, but everything is real. It is armageddon-like. It’s so overwhelming,” a police official at the scene told The Buffalo News.

A 106-page online manifesto, believed to have been uploaded by the shooter, explained that he was motivated by a conspiracy theory that white people are being replaced by other races. In the document, he says he is 18 years old and a self-described white supremacist and anti-semite.

“If there’s one thing I want you to get from these writings, it’s that White birth rates must change. Everyday the White population becomes fewer in number,” the document says. “To maintain a population the people must achieve a birth rate that reaches replacement fertility levels, in the western world that is about 2.06 births per woman.”

BNO News is not publishing the document released by the shooter.

The methods used in the shooting are similar to those of a man who opened fire at two mosques in Christchurch, New Zealand, in March 2019, killing 51 people in one of the worst shootings in modern history. The shooter live-streamed his attack and described himself as a white supremacist in an online manifesto. He too believed in the “Great Replacement” conspiracy theory.

Hearing reports of a mass shooting at Tops. SWAT is here. pic.twitter.com/9lPUTHUSNp