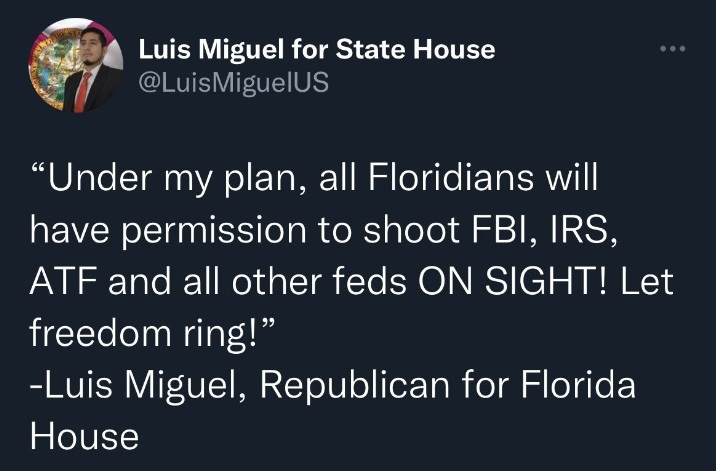 A Republican candidate for the Florida House of Representatives has been banned by Twitter after he called for the legalization of violence against federal agents. His statement remains live on Facebook.

Luis Miguel, who is running against incumbent Bobby Payne in next week’s Republican primary for Florida House District 20, posted the controversial statement on all of his social media accounts.

“Under my plan, all Floridians will have permission to shoot FBI, IRS, ATF and all other feds ON SIGHT! Let freedom ring!,” Miguel said. Twitter and Instagram have since removed the quote, but it remains live on Facebook.

“The FBI is now a terrorist organization and should be treated as such,” Miguel said earlier this month. “When elected, I will introduce the Keep the Feds out of Florida Act to stop the witch hunts and arrest all these commie feds.”

Miguel describes himself as a “Christian patriot” and pro-Trump Republican who falsely claims the former president was removed in a “coup” and replaced by the “illegitimate Biden regime.” Trump, who lost the 2020 election to Biden, is expected to run again in 2024.

Woman falls to her death near Oregon waterfall