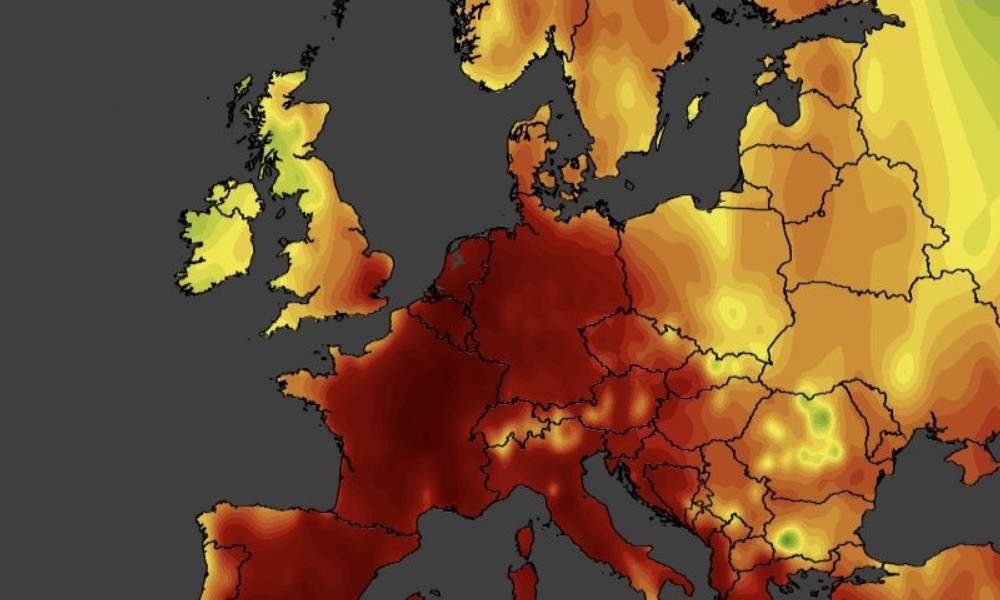 Heat across Europe at 1600 GMT on Wednesday (Credit: wxcharts.com)
Advertisment

Temperatures in Germany and Belgium exceeded 40 degrees Celsius (104°F) on Wednesday, making it the hottest day on record in both countries, and they could rise even further on Thursday, forecasters say. All-time temperature records were also broken in the Netherlands.

The German Weather Service said the maximum temperature reached 40.5°C (104.9°F) in Geilenkirchen, a town in the western state of North Rhine-Westphalia. It makes it the highest temperature ever recorded in Germany, surpassing the 40.3°C (104.5°F) in Kitzingen in 2015.

The temperatures in Germany, Belgium, and the Netherlands were the highest ever recorded in those countries, but forecasters expect that the temperature could risen even further on Thursday afternoon, when all-time records in Luxembourg and England are also at risk.

“Tomorrow it will be a little hotter locally. It’s possible that today’s record will last only one day,” the German Weather Service said.

Parts of Europe are experiencing their second heat wave in as many months, with Thursday expected to be the hottest day of the week. On June 28, the temperature reached 46°C (114.8°F) in Vérargues in southern France, breaking the country’s all-time record.

A number of deaths were reported in connection with last month’s heat wave, but heat-related deaths are historically under-reported, which means the actual death toll could be significantly higher. The European heat wave in 2003 was blamed for more than 70,000 deaths in 16 countries.