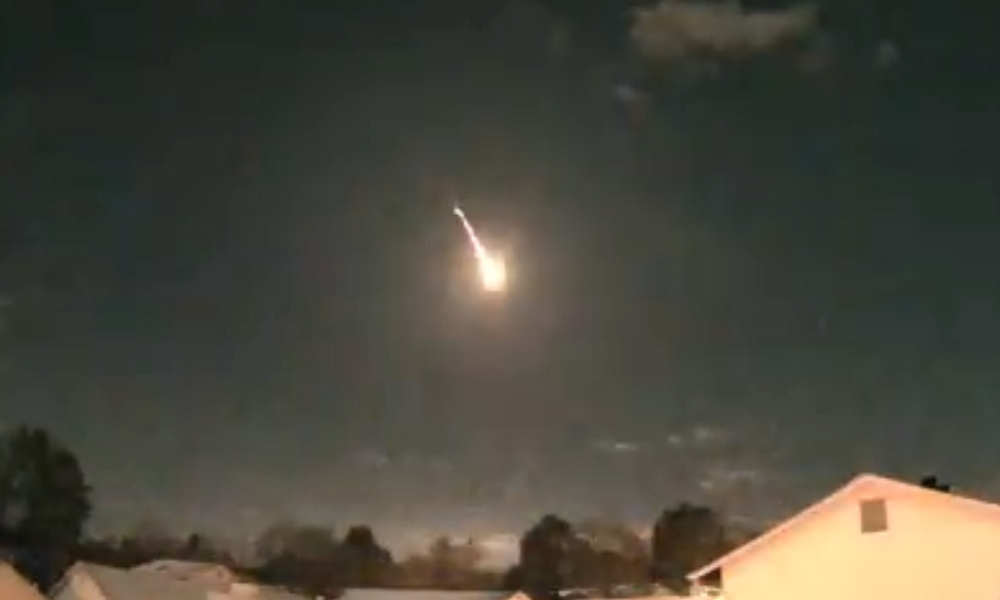 The meteor as seen in O'Fallon (Credit: @ofallonweather)
Advertisment

An object believed to be a meteor was seen streaking across the sky in parts of Missouri on late Monday night, officials and witnesses say. The streak of light was visible in St. Louis and was accompanied by a loud boom that shook the region.

The incident happened at 8:51 p.m. CT on Monday when residents in Missouri reported seeing a large “fireball” in the sky. The event, which was also seen in neighboring states such as Illinois, Tennessee, and Mississippi, was captured on video by both private and online cameras.

It was not immediately known if anything reached the ground, but there were no reports of damage or injuries. Police in Missouri reported receiving a large number of calls about the phenomena, and some units were checking the area to confirm that nothing had reached the ground.

“Felt a big shake and heard a boom tonight and figured something fell in the house, but turns out a meteor came near us,” a resident in O’Fallon said. The meteor was also seen in St. Charles, Weldon Spring, and communities in neighboring states.

The meteor was likely part of the Northern Taurids meteor shower, which reached its annual peak on Monday night. Astronomer Phil Plait estimated that the meteor was about 1 meter in size. “The flashes are from it breaking up as it rams the air hypersonically,” he said. “Each new piece burns rapidly, so it flashes. Might be small meteorites from that, too.”

Meteors occasionally survive the fiery passage through Earth’s atmosphere, but they usually go unnoticed because many fall in the ocean. A meteorite fell in Cuba in February, causing some damage but no injuries. And in 2013, a meteor exploded over Russia, injuring nearly 1,500 people.

I was watching an @EarthCam camera from St. Louis, Missouri about 30 minutes ago and saw a #meteor! pic.twitter.com/PVAvIGlALF

Meteor falls from the sky in Lake St. Louis

Meteor outside of St. Louis showed up on satellite imagery.