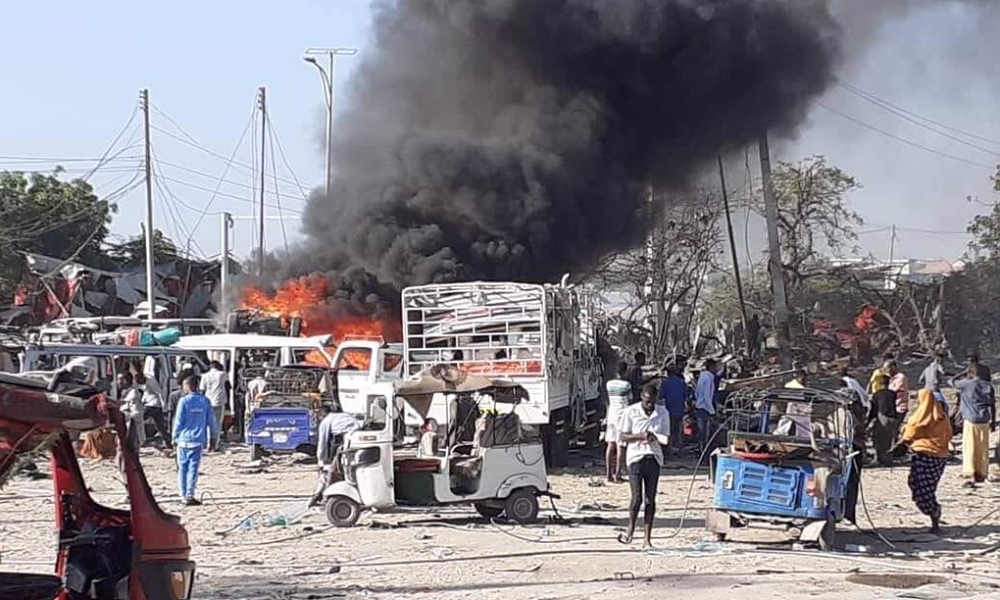 A truck bomb has exploded along a busy road on the outskirts of the Somali capital Mogadishu, killing at least 79 people and injuring more than 100 others, local officials say. University students, police officers, and foreigners are among those killed.

The attack happened just after 7 a.m. on Saturday when an explosives-laden vehicle exploded at the Ex-Control checkpoint on the outskirts of Mogadishu. Hundreds of people were in the area and several buildings were destroyed or heavily damaged.

The total number of casualties was not immediately clear. Government spokesman Ismael Mukhtar Omar said at least 79 people were killed in Saturday’s attack, but member of parliament Abdirizak Mohamed said the death toll would reach at least 94, including 73 civilians, 17 police officers and 4 foreign nationals.

A minibus carrying about 15 to 20 students from Benadir University was destroyed in the blast, officials said, and Turkey’s ambassador to Somalia said at least 2 Turkish nationals were among those killed. Omar said at least 149 people were injured and taken to area hospitals.

“My heartfelt prayers and sincere condolences to the families of the innocent citizens, including two Turkish brothers, who lost their lives in the heinous attack this morning,” Foreign Minister Ahmed Awad said. “May the Almighty Allah have mercy on them. They were students with ambition, and hardworking men and women.”

There was no immediate claim of responsibility for Saturday’s truck bombing, but attacks in Somalia are usually carried out by the al-Qaeda-linked militant group Al-Shabaab, which vowed to fight the government of President Mohamed Abdullahi “Farmajo” Mohamed.

In October 2017, a large truck filled with explosives was detonated on a busy street near the Safari Hotel in Mogadishu, causing a huge explosion which ignited a nearby fuel tanker. At least 587 people were killed, making it one of the world’s deadliest terrorist attacks in history.

PHOTO of the shell of what is believed to be a college bus that was carrying Banaadir University students. Mayor Omar Filish confirmed that the varsity students were among the dead although their number is not clear. pic.twitter.com/z76jBMG2HR