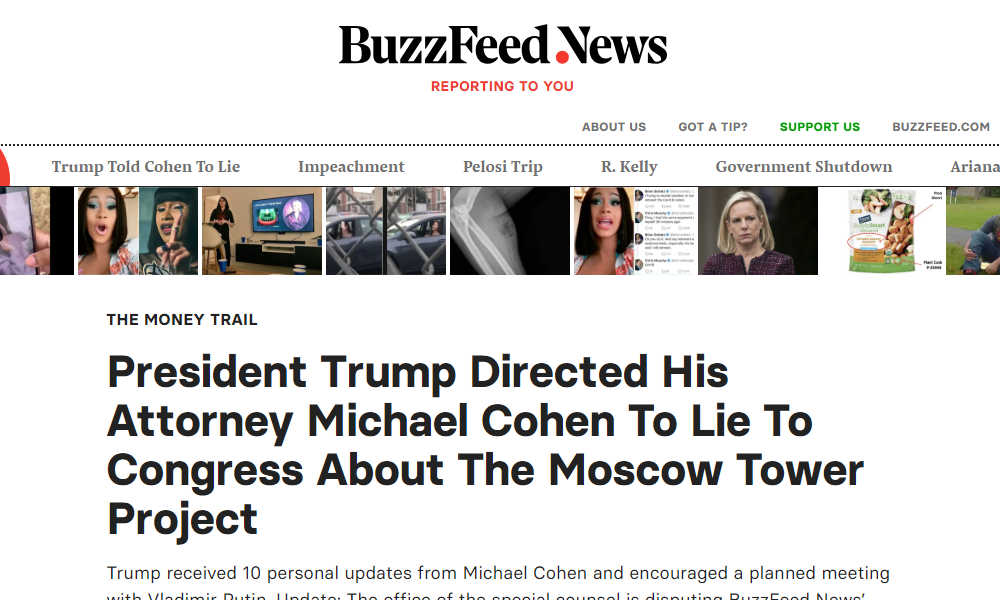 A BuzzFeed article that claimed U.S. President Donald Trump had directed his longtime attorney Michael Cohen to lie to Congress is “not accurate,” according to the Special Counsel’s office.

The explosive article, by Jason Leopold and Anthony Cormier, was published on Thursday night and made headlines around the world, even though it could not be confirmed by other news organizations.

“BuzzFeed’s description of specific statements to the Special Counsel’s Office, and characterization of documents and testimony obtained by this office, regarding Michael Cohen’s Congressional testimony are not accurate,” Special Counsel spokesman Peter Carr said on late Friday.

Carr’s statement does not specify which parts of the article are not accurate, but the rebuttal is virtually unprecedented because the office rarely comments on media reports.

“We stand by our reporting and the sources who informed it, and we urge the Special Counsel to make clear what he’s disputing,” BuzzFeed Editor-in-Chief Ben Smith said on Twitter.

Trump’s son, Donald Trump Jr., welcomed Carr’s statement by sending a tweet filled with laughing emojis. His father had already denied the report from BuzzFeed, claiming that Cohen was “lying to reduce his jail time.”

The article claims that Trump, who denied having business deals with Russia, was receiving regular updates about negotiations to build a Trump Tower in Moscow. It further alleges that Trump later instructed Cohen to lie to Congress in order to obscure Trump’s involvement.

Cohen, who is due to start serving a 3-year prison sentence after pleading guilty to campaign finance violations, tax evasion, and lying to Congress, has neither confirmed nor denied BuzzFeed’s article.

Special Counsel Robert Mueller and his team are investigating Russia’s alleged interference in the 2016 presidential election and possible links to the Trump campaign.