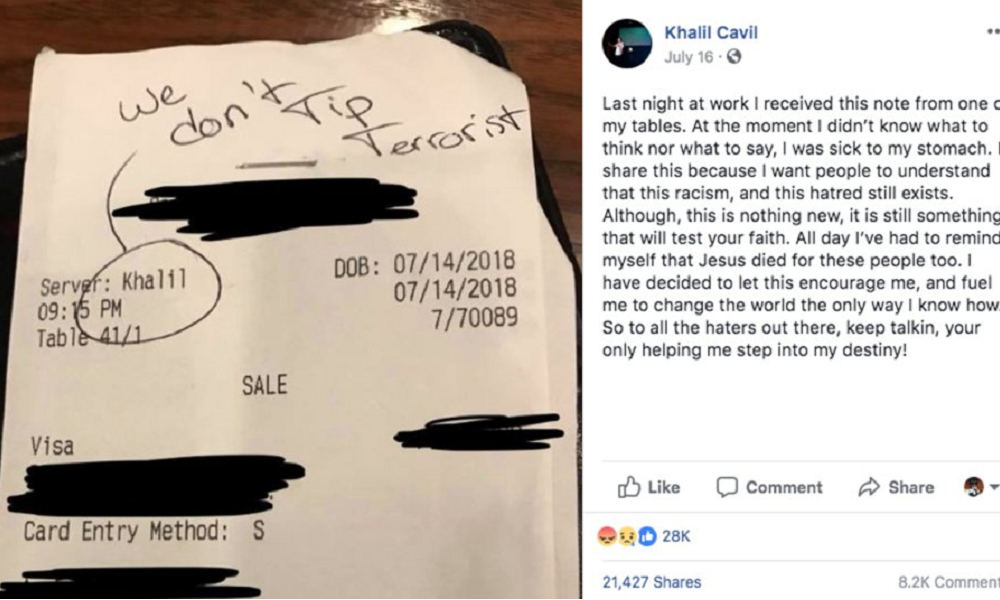 A waiter in Texas who accused a customer of writing a racist message on a receipt has been fired after it was discovered to be a hoax. The customer has been invited back after initially being banned from the restaurant.

Khalil Cavil, a 20-year-old server for Saltgrass Steak House in Odessa, claimed in a post on Facebook that a customer had left a racist note on a receipt. The post, along with a photo of the receipt, quickly went viral and the customer was banned from the restaurant.

“We don’t tip terrorist,” the note said. Cavil claimed the message had left him “sick to his stomach” and said the experience tested his faith, but added that he decided to let it inspire him to “change the world.”

After further investigation, the restaurant discovered that the entire story had been fabricated, according to Terry Turney, the chief operating officer at Saltgrass Steak House.

Cavil admitted in an interview on Monday that he made up the story. “I did write it … I’m sorry. I deeply made a huge, big mistake. And I’m in the process of getting the help that I need,” Cavil told the Odessa American newspaper.

Cavil explained that he had hoped his hoax would spur conversation “about this hatred that is still going on, that is still here and prevalent.” He also promised to return donations which he received from strangers.

It was not immediately known how Saltgrass discovered the hoax, but Cavil is no longer employed at the restaurant. Turney said the customer who Cavil accused is no longer banned and has been invited for a free meal.

“Racism of any form is intolerable, and we will always act swiftly should it occur in any of our establishments,” Turney said in Monday’s statement. “Falsely accusing someone of racism is equaling disturbing.”