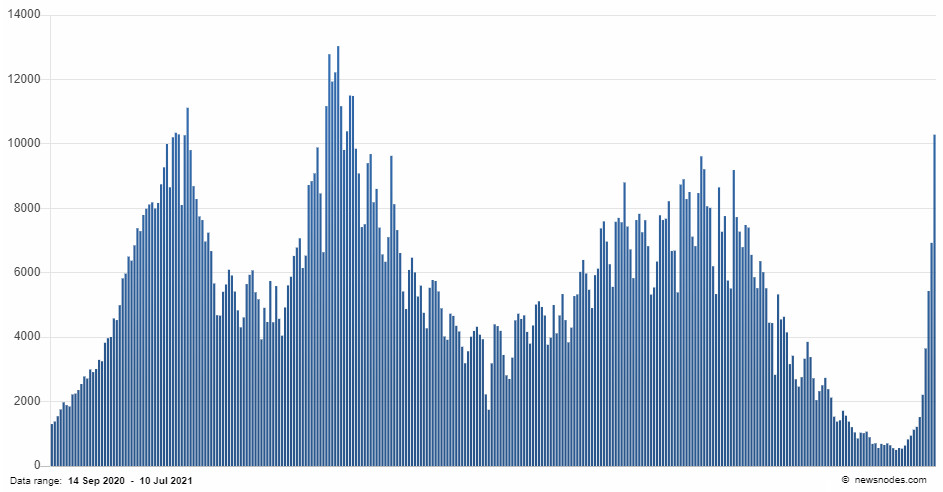 The Netherlands reported more than 10,000 new coronavirus cases on Saturday, an eightfold increase when compared to last week after most restrictions were lifted despite the rise of the fast-spreading Delta variant.

The National Institute for Public Health (RIVM) said 10,345 new cases were reported on Saturday, the biggest one-day increase since December 25. This compares to 1,146 new cases on the same day last week.

“The coronavirus infection rate in the Netherlands has increased much faster than expected since society reopened almost completely on 26 June,” the government said in a statement on Friday. “Most infections have occurred in nightlife settings and parties with high numbers of people.”

Even though the current surge is not posing a threat to vulnerable groups or the capacity of the healthcare system, such high numbers create a risk for people who are not (fully) vaccinated and raises the possibility of new variants, the government said. Some may also suffer from long COVID.

Prime Minister Mark Rutte announced new measures on Friday in an attempt to stop the “unprecedented” surge in new cases. These measures focus mainly on nightclubs, music festivals, and restaurants because most of the spread is occurring among young adults.

Friday’s announcement followed an urgent advice from the Outbreak Management Team, which expects that pressure on the healthcare system will soon increase, even though it is currently declining. On Friday, only 12 people were admitted to hospital.

“If the increase among teenagers and people in their early twenties continues, it will increasingly spread among the unvaccinated population and the vulnerable, and this group amounts to more than 3 million people,” the team said in its advice. “The pressure on the healthcare system will increase substantially in parallel.”

Virologist Marion Koopmans, who is part of the Outbreak Management Team, said tougher restrictions cannot be ruled out if cases continue to rise in the coming days. “We are closely watching what happens next week,” she told local media.

More than 1.7 million people in the Netherlands have been infected with COVID-19 since the pandemic began, including 17,765 people who died, according to NewsNodes. Nearly 6.5 million people, or 37.1% of the population, is fully vaccinated against COVID-19.