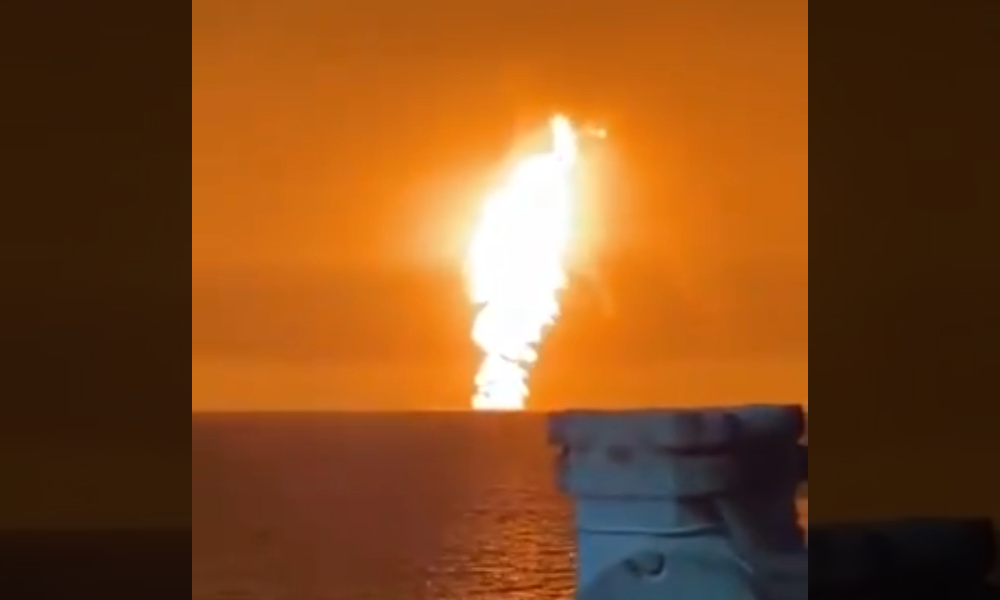 The explosion as viewed from an oil platform (Credit: Zaman)
Advertisment

A mud volcano has erupted near an oil platform off the coast of Azerbaijan, causing a large fireball which was visible across the region, officials and witnesses say.

The incident happened at 9:30 p.m. local time on Sunday when a large explosion and fire were reported in the Caspian Sea south of Baku, the capital of Azerbaijan. Large flames were seen lighting up the sky.

Local media initially reported that the explosion happened at an oil platform, but this was quickly denied by the State Oil Company (SOCAR), which said no accidents had taken place. Rumors about a blast on a ship were also denied.

“No accidents occurred on the oil platforms or ships,” Gurban Yetirmishli, the director of the country’s seismological service, told the APA news agency. “This is a sign of a mud volcano. There are many mud volcanoes in the Caspian Sea, one of which erupted.”

A spokesman for SOCAR said a ship with experts had been sent to the scene to investigate what happened. “The public will be informed as soon as there’s additional information,” he said, according to APA.

No ships and none of the oil platforms appeared to have been affected by Sunday’s explosion. There were no reports of injuries.

WATCH: Large explosion reported near oil platform in the Caspian Sea; officials say it may have been caused by a mud volcano pic.twitter.com/eqwNw110bF

Alleged video of the explosion pic.twitter.com/u0CbsaJsJY