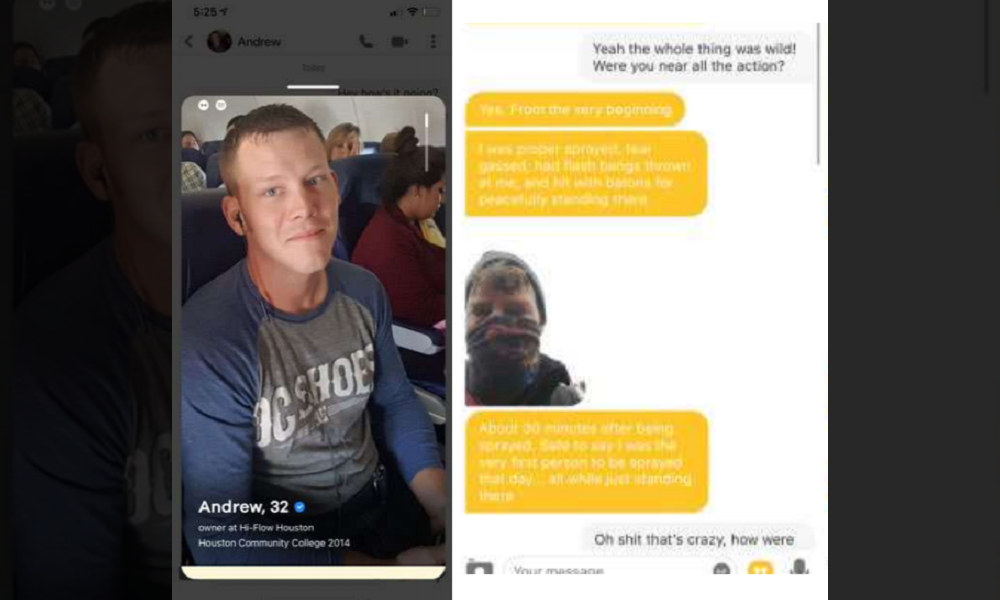 A Texas man has been arrested for his alleged role in the breach of the U.S. Capitol on January 6 after his Bumble match reported him to the FBI, officials say. He’s the second man to get caught after boasting about the crime on the dating app.

Andrew Taake, the 32-year-old owner of the Hi-Flow washing service in Houston, was arrested on Friday after the FBI received a tip from his match on the Bumble dating app.

“Taake discussed his participation in the riot with Witness 1 and sent Witness 1 several pictures of himself, including a picture of himself taken on January 6, 2021, after he was allegedly pepper sprayed by law enforcement officers,” an FBI agent said in the criminal complaint.

Asked if he was near the action, Taake told his match that he ws there “from the very beginning,” according to a blurry screenshot released by investigators. He further admitted to being inside the Capitol building for about 30 minutes.

In following up on the tip, the FBI reviewed flight records which showed that Taake had flown from Houston to Baltimore on January 5. They also found publicly posted videos and photos in which the man is shown inside the U.S. Capitol at the time of the riot.

“Several of these images show Taake using what appears to be a metal whip and pepperspray to attack law enforcement officers,” the complaint said.

One of those attacks happened when officers were on their way to assist other officers who were trying to stop rioters from entering the Capitol. “Taake emerged from the crowd and can be seen striking officers with a weapon that appears to be a whip. After the attack, Taake retreated back into the crowd,” the complaint said.

Taake has been charged with five federal offenses, including assault on officers, obstruction of law enforcement during civil disorder, and engaging in physical violence in a restricted building or grounds.

Taake is the second rioter to get caught after bragging to a match on the Bumble dating app.

Robert Chapman from New York was arrested in April after telling his match that he ‘stormed the Capitol’ on January 6. “We are not a match,” the other user said before reporting him to the FBI.