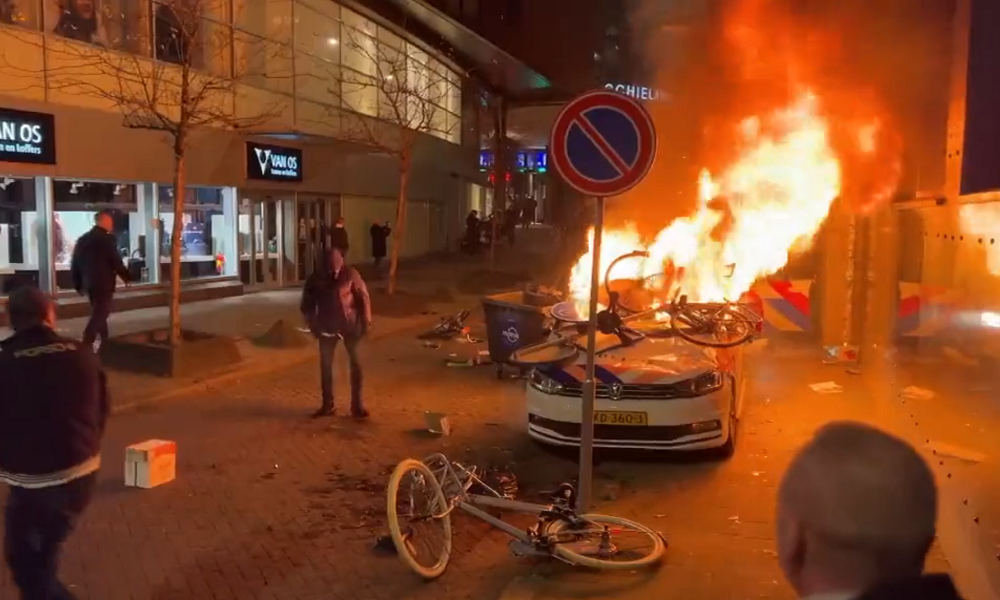 Riots have erupted during a protest against coronavirus restrictions in the Dutch city of Rotterdam, officials and witnesses say. At least 9 people were injured, including two rioters who were shot by police.

The unrest began around 8 p.m. on Friday people were gathering for a protest against coronavirus measures in the Netherlands, including the proposed “2G rule,” which requires proof of vaccination or recovery for access to certain locations.

Footage on social media showed chaotic scenes, police cars on fire, and riot police responding. In one video, a gunshot can be heard before a man falls onto the ground.

Public broadcaster NOS said at least two people had been shot by police, but their conditions were not immediately known. There was also no word on the exact circumstances of the shootings.

“Fires have been set at various places, fireworks are being lit and the police have fired multiple (warning) shots,” Rotterdam Police said in a statement. “The police is present in large numbers and is trying to restore order.”

Jan Struijs, the chairman of the Dutch Police Union, called the riots a “serious crisis” with a lot of violence. “It’s a real battle with many injured, a lot of fires, a lot of fireworks, and a lot of vandalism,” he told local TV, adding that some of the perpetrators were not part of the protest and came purely to riot.

Rotterdam Mayor Ahmed Aboutaleb confirmed at a press conference on early Saturday morning that at least seven rioters were injured, as well as multiple police officers. He added that dozens of people had been arrested.

The Dutch government announced a partial lockdown earlier this month in an effort to slow a new coronavirus wave. 23,591 new cases were reported on Thursday, by far the biggest one-day increase on record.