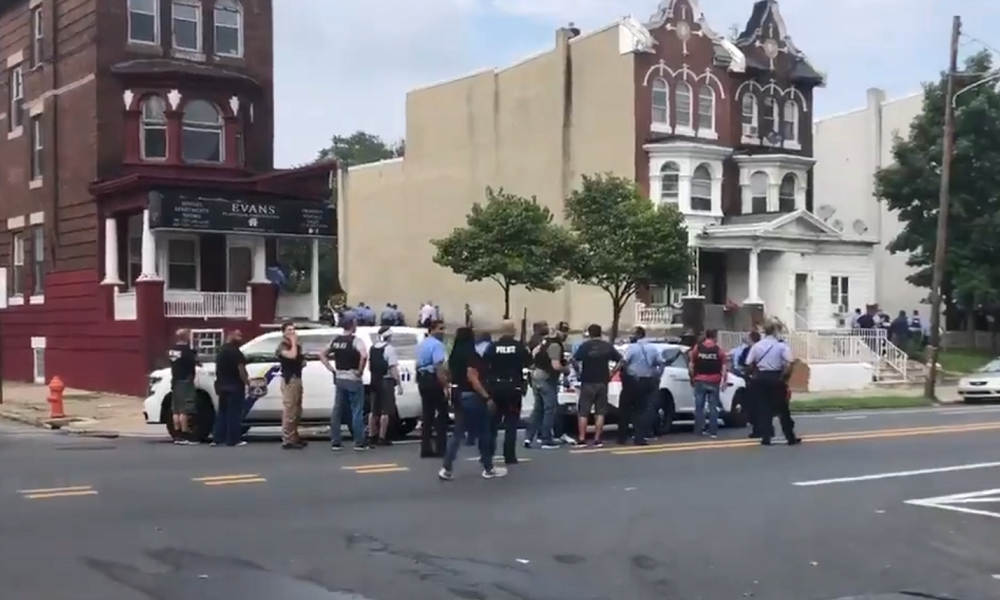 UPDATE: The two officers who were trapped have been rescued after nearly 5 hours, according to police spokesman Eric Gripp. The suspect is still inside the house.

Police and other emergency services are dealing with an active shooter situation at a home in northern Philadelphia, local officials and witnesses say. At least six police officers have been shot, two more have been injured in a crash, and gunfire continues.

The incident began at about 4:30 p.m. on Wednesday when officers from the Narcotics Strike Force were serving a warrant in the 3700 block of North 15th Street in Philadelphia. Other details were not immediately known but, at one point, gunfire erupted.

Two narcotics officers and three people they had taken into custody were still trapped inside the residence at 6:30 p.m. Numerous shots were being fired by at least one suspect on the floor below them. He’s believed to have multiple weapons, including a semi-automatic rifle.

At least six police officers were shot and taken to area hospitals with non-life threatening injuries, police spokesman Eric Gripp said in an update at 6:20 p.m. Two other officers were injured in a car crash while responding to the scene.

“Shooter is still armed inside location .. Officers are attempting to communicate with the shooter; imploring him to surrender and avoid further injuries,” Gripp said in an update at 7 p.m. Another round of gunfire was heard just before 7:30 p.m.

As a result of the shooting, Temple University’s Health Sciences Center Campus was put on lockdown as a precaution.

“I’m monitoring the active shooter situation in North Philadelphia and have offered support to local law enforcement,” Pennsylvania Governor Tom Wolf said. “Praying for the recovery of the police officers who were injured in the line of duty and the safety of others responding to this incident.”

Got out of the subway and Broad Street looks like a police parking lot. An officer with a bandage over his left ear and a bloody shirt told me to walk the other way. pic.twitter.com/A1wYMaTUqB