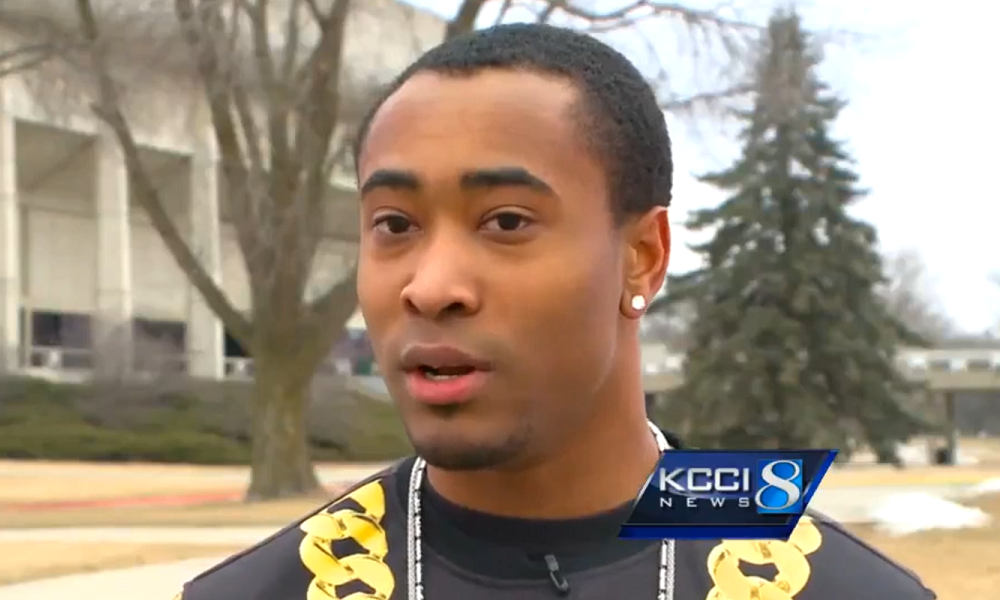 Adams, who is also known as Polo, in a 2015 interview
Advertisment

A former Iowa State University student and the founder of #DoIt4State, which became popular among students and gained millions of followers, has been sentenced to 14 years in prison in a violent plot to steal an internet domain name. It led to the shooting of the URL’s owner.

Rossi Lorathio Adams II, 27, of Cedar Rapids, heard his sentence on Monday after a jury found him guilty earlier this year on one count of conspiracy to interfere with commerce by force, threats, and violence. He was sentenced to 168 months in federal prison and ordered to pay nearly $9,000 in restitution.

Adams, who is also known as Polo, had court-appointed counsel during his trial, but the court later discovered that he was earning significant amounts of money while the case was pending. As a result, he was ordered to pay nearly $26,000 in prosecution and attorney costs.

Adams founded State Snaps, also known as #DoIt4State, while attending Iowa State University in late 2014. Together with ” Do It For State Girls,” his Instagram accounts had more than 2 million followers earlier this year. Many of the postings showed young adults in crude behavior, drunkenness, and nudity.

According to prosecutors, between 2015 and 2017, Adams repeatedly tried to purchase the internet domain doitforstate.com, but the owner in Cedar Rapids refused to sell it. At the time, Adams and his followers were often using the slogan “Do It For State!”

Friends of the domain’s owner eventually began using the website to promote concerts, after which Adams threatened one of those friends with gun emojis. But his efforts took a darker turn in June 2017, when Adams enlisted his cousin, Sherman Hopkins, Jr., to break into the owner’s home to force him to transfer the domain at gunpoint.

Soon thereafter, on June 21, 2017, Adams drove Hopkins – a convicted felon who was living at a homeless shelter at the time – to break into the owner’s home in Cedar Rapids. He also gave him a note with instructions on how to transfer doitforstate.com to Adams’ GoDaddy account.

Hopkins, who disguised himself with a hat, a pantyhose, and dark sunglasses, was armed with a stolen gun and taser, according to prosecutors. He entered the home but was detected by the victim, who fled into an upstairs bedroom and shut the door.

“Hopkins went upstairs and kicked the door open,” the U.S. Attorney’s Office for the Northern District of Iowa said in a statement earlier this year. “Hopkins grabbed the victim by the arm and demanded to know where he kept his computer.”

When the victim told Hopkins that he kept his computer in his home office, Hopkins forcibly moved the victim to the office, where he ordered him to turn on his computer. He then pulled out Adams’ demand note which contained a series of instructions on how to transfer an internet domain name.

“Hopkins put the firearm against the victim’s head and ordered him to follow the directions on the demand note. Hopkins then pistol whipped the victim several times in the head,” prosecutors said. This led to a struggle during which the victim was shot in the leg but managed to gain control of the gun. Hopkins was shot multiple times. He was sentenced to 20 years in prison at an earlier trial.