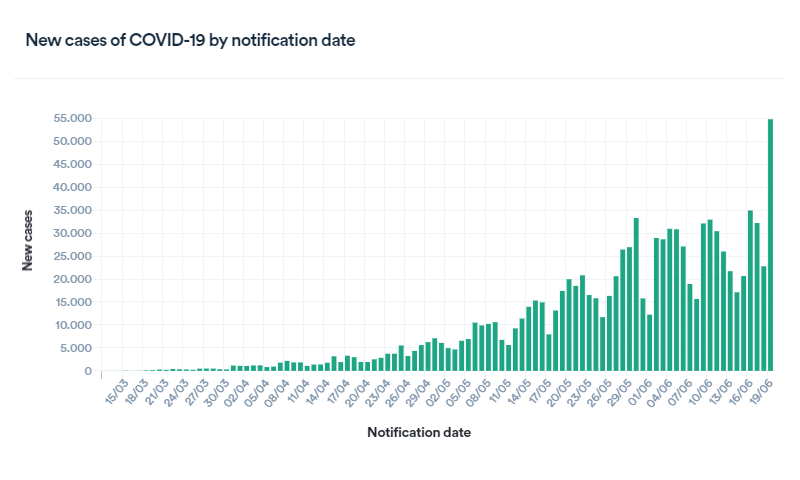 Brazil has reported nearly 55,000 new cases of coronavirus, by far the largest one-day increase for any country in the world since the pandemic began, pushing the total number of cases in the South American country to 1 million.

The health ministry said it had been notified of 54,771 new cases of COVID-19, the disease caused by the novel coronavirus. It also reported 1,206 new deaths on Friday and 25,098 new recoveries.

It marks the biggest one-day increase for any country in the world and puts the total number of cases in Brazil at 1,032,913. Nearly 50,000 deaths have been linked to the disease, from which more than 500,000 have recovered.

Experts believe the real number of cases is significantly higher due to a lack of widespread testing.

“That number of 1 million is much less than the real number of people who have been infected, because there is under-reporting of a magnitude of 5 to 10 times,” Alexandre Naime Barbosa, a medical professor at São Paulo State University, told Reuters. “The true number is probably at least 3 million and could even be as high as 10 million people.”

Brazil is one of the worst-hit countries in the world, second only to the United States. More than 150,000 new cases of coronavirus were reported worldwide on Thursday, the biggest-one day increase so far. Almost half were in the Americas.

Related Topics:BrazilCOVID-19 pandemic
Up Next