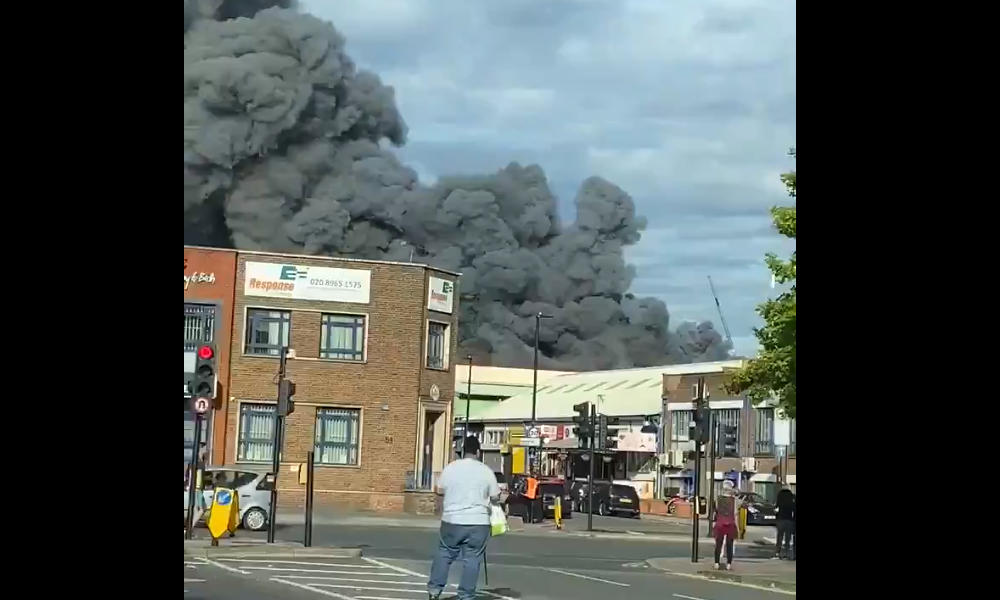 The fire in the Park Royal area (Credit: @Light_ef)
Advertisment

A large fire engulfed a bakery in the Park Royal area of West London on Thursday, causing thick plumes of smoke which were visible from miles away, officials and witnesses said. There were no immediate reports of injuries.

The fire began at about 6:20 p.m. on Thursday when emergency services were called to a bakery and restaurant on Minerva Road. The London Fire Brigade had initially said it was a shop with flats above it, but that turned out to be incorrect.

The Fire Brigade said 15 fire engines and more than 80 firefighters were called to the scene. “There is a lot of thick black smoke so please close your doors and windows if you are nearby,” the fire brigade said, adding that it had received more than fifty 999 calls because of the fire.

“This is a severe, complex and highly visible fire with our 999 Control taking over 50 calls in the early stages,” said Graham Ellis of the London Fire Brigade. “Due to the layout of the building and access to pockets of fire that remain we will be at the scene throughout the night.”

Footage from the scene showed large plumes of black smoke billowing from the scene, which is next to a tile store known as Tile Land and close to the Asda Park Royal Superstore. There were no reports of injuries.

Related Topics:EnglandLondon (England)
Up Next