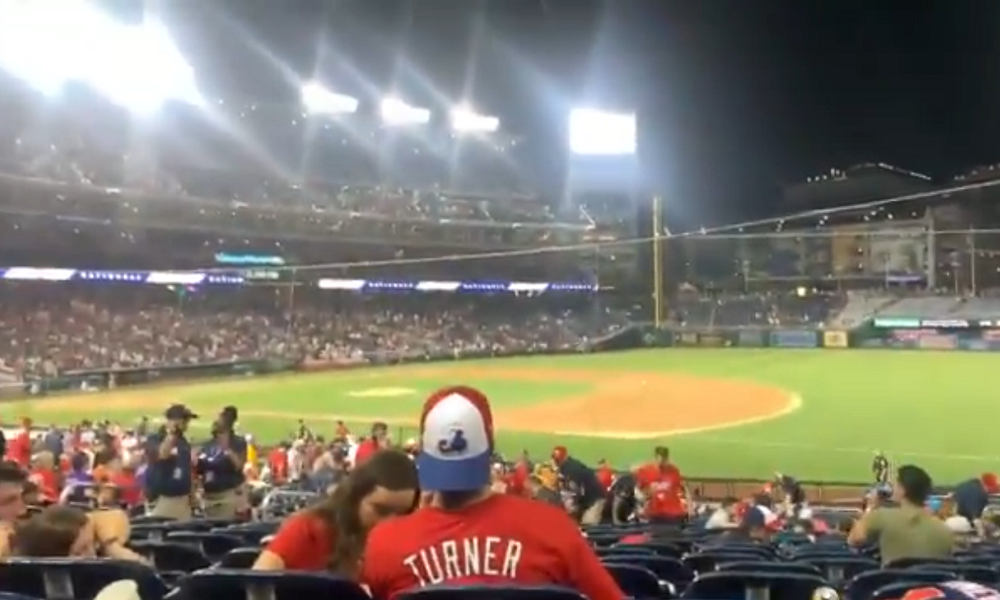 At least three people have been injured in a shootout outside the Nationals Park baseball stadium in Washington, D.C., local officials and witnesses say. The sound of gunfire prompted some people in the audience to flee and seek shelter.

The shooting happened just after 9:30 p.m. on Saturday in the bottom of the 6th inning of the game between the Washington Nationals and the San Diego Padres. The shots were fired on the street outside the stadium, near the Third Base Gate.

Authorities described the incident as a shootout between two cars in the 1500 block of South Capitol Street, and two people in one of the cars were shot and injured. A female bystander was also hit and suffered injuries which are not believed to be life-threatening.

Police initially reported that four people had been shot but later revised it to three.

The sound of gunfire prompted some people in the audience to flee and seek shelter. “Ladies and gentlemen, your attention please,” an announcer at the stadium said shortly after the gunfire, adding: “At this time we ask that you remain in the stadium. Please remain calm.”

A short time later, fans were asked to exit the ballpark via the CF and RF gates.

Details about the circumstances of Saturday’s shooting were not immediately known, and it’s unclear if any arrests have been made. “We’re working with law enforcement to provide more information as soon as it becomes available,” the Washington Nationals said in a statement.

A second statement said the game will resume at 1:05 p.m. on Sunday and will be completed as a nine-inning regulation game. Tickets and parking passes for the game may be used for admission to both of Sunday’s games, the team said.

Hope everyone is safe at Nationals park. I heard a few loud bangs and then a mass exodus. View from my roof pic.twitter.com/MA1B7z83u2

Reports of an active shooter near Nationals Park in D.C.

Fans are taking cover under the seats, some running into the dugout to hide

Fans are taking cover under seats

Helicopters are now circling the stadium