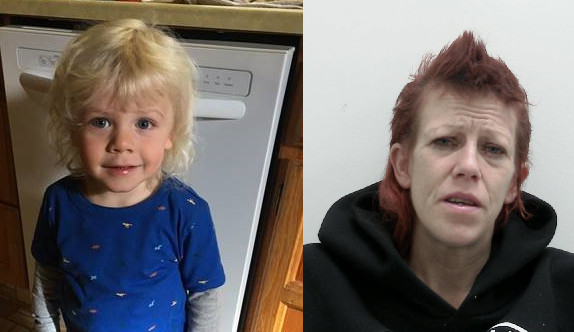 UPDATE: The amber alert has been canceled. Hawkin was found safe.

An Alberta Amber Alert has been issued for 2-year-old Hawkin Gerald Thomas after he was allegedly taken by his mother in downtown Calgary, local officials say. Anyone with information is urged to call 911 immediately.

Hawkin was abducted at about 2:30 p.m. on Thursday following a supervised visitation with his mother, 40-year-old Tamara Jean Vanderjagt, in the 1900 block of 9 Avenue S.E. in the Inglewood area of Calgary, according to the amber alert.

Vanderjagt is described as a 40-year-old white female with short bright red hair who was last seen wearing a black hoodie and red pants. She’s believed to have taken Hawkin in a brown 2017 Mitsubishi Outlander with Alberta license plate NLY991.

“Multiple resources have been searching the city, however, have not been able to locate Hawkin or his mother, and we are concerned for his welfare,” Calgary police said in a statement, which provided no further details about the circumstances of Hawkin’s abduction.

Anyone who sees Hawkin, Vanderjagt, or the suspect vehicle is urged to call 911 immediately, or call local law enforcement if you have any other information that could help investigators in their search.